It was so fun working with this couple! Sydney and Evan do photography and videography for weddings and are super kind people. One of the cool parts of shooting for people who are also in the industry is how well-planned things usually are. Sydney and Evan’s eastern Washington intimate wedding was no exception. The couple arranged all the details and even picked out and scouted the shoot locations.

For the first looks, Sydney and Evan chose Frenchman Coulee in the gorge, near Quincey, WA. Natural rock formations in the gorge made perfect little hideaways for our pre-wedding shots. The bride and groom didn’t want to see each other before Sydney walked down the aisle. So, instead of the typical first look, we did first looks with Sydney and her dad, Sydney and the couple’s little boy, and with Evan and his mom. Sydney and Evan’s son is the absolute sweetest little guy, a highlight of the day.

Even though they wanted to wait until the ceremony to see each other, these two still wanted a special moment together before Sydney walked down the aisle. We found an excellent spot in the rocks where they could stand close together without Evan seeing Sydney. They took a few minutes there to hold hands and pray together.

After the first looks, we headed up a short trail to the ceremony location. The couple chose a beautiful spot tucked among the rocks near a small waterfall, a beautiful backdrop for this eastern Washington intimate wedding. The couple’s son held my hand and walked with me as we hiked in. It was so cute! Then, Sydney hid in a pop-up changing tent so Evan wouldn’t see her while everyone got the gorgeous flowers and ceremony table set up.

Sydney looked so incredible in her gown from Allure Bridals paired with glamorous sheer half-sleeves and a statement veil. Despite some crazy wind, we captured beautiful images of the ceremony. Especially lovely were the sweet family moments between Sydney, Evan, and their son. The whole family was so kind and helpful. They were a fun group of people to spend the day with.

The table was setup for dinner after the ceremony, but it was so windy that we couldn’t do an actual reception. So, we went with the flow. We managed to get a few photos of the bride and groom at the table, then everyone took their food to go and ate in the cars. Sydney, Evan, and I waited until sunset, then braved the freezing wind one more time for their bridal session. This eastern Washington intimate wedding threw us some curve balls, but it was all worth it in the end!

Officiant: Another One Ties The Knot 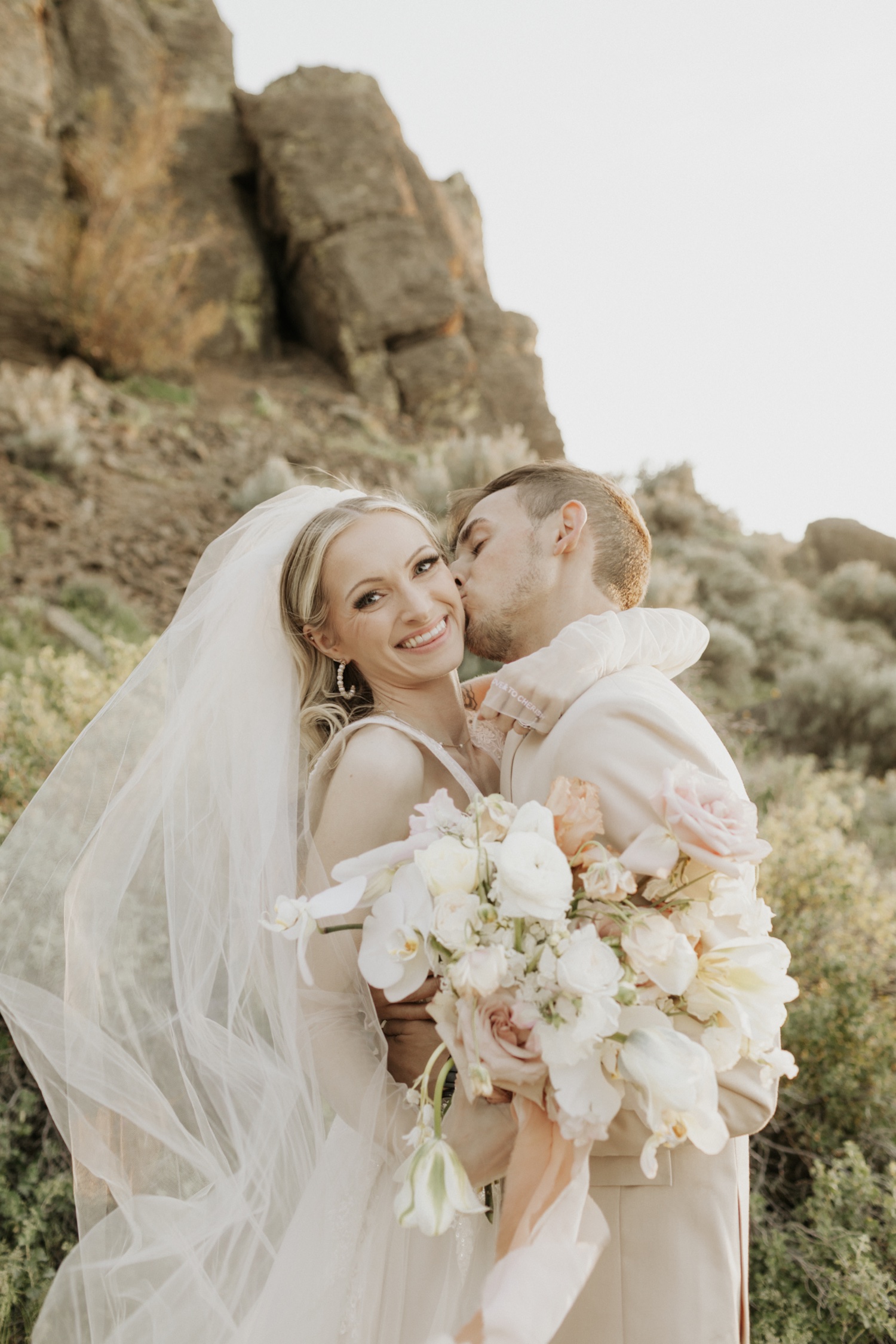 See more weddings on my blog!